That fancy light fixture might be moving on too… what stays and what goes when houses trade hands.

Did you know that unless you specify otherwise, you are expected to leave all of the window treatments at your house when you sell it? I’m torn between thinking that’s weird and it makes total sense, what do you think?

On the one hand, if I like my curtains I might want to take them! But really, what are the odds your new windows will be the exact same size, and you’ll have the exact same number of them as your current house? Long. The odds are long. So they stay put and hopefully they aren’t ugly and your buyers don’t just want to throw them away. {please don’t buy ugly curtains. And avoid brown, stay away from brown!}

I’ve heard of some stories where people want to keep something that would typically stay, and more often than not it boils down to sentimental value.

I’ve heard of someone keeping a stove because they bought it with money that was gifted by a parent who had since passed away. That’s sweet, but we could also just pull our energy out of the appliances and the house and move on and get a better ~ newer ~ stove! And also not have the {semi-large and totally avoidable} hassle of disconnecting things like that and then moving them and reconnecting them. Ick.

When my family moved when I was ten years old, I thought it was weird that we took the refrigerator… why would people do that? Isn’t it easier to just leave the appliances, the new people need a fridge too! But apparently that’s how it was done back in the day in Virginia. {side note, both appliances from my stories were damaged in their moves, so moral of the story ~ not worth it}

In Chicago on the other hand, you leave all of the appliances behind, unless you happen to want to keep them in which case you have to make that known before you list your property. No, you can’t wait until you get some bomb ass offer and then let everyone know that you’re keeping the brand new washer and dryer.

Guys, just leave the appliances. If they are awesome they are probably what is making your space awesome and appealing to your buyer. And if they are just average, then you don’t need to keep them! Done and done.

So how does this all work? What stays and what goes? As a seller, you absolutely have the right to exclude things from the sale of your home, but you have to make those things known when you put it on the market, not after you’ve accepted an offer. A good agent will ask you if you want to exclude anything as you are getting your house ready to sell.

Here are items that typically stay, and some things that people get confused and worried about that I think are hilarious because trying to take them would basically involve a renovation. People can be so weird.

Anything attached to the house typically stays. If there’s a sunroom or greenhouse with all glass walls, that’s actually a structure and is part of the house. It stays. You don’t demo parts of a house and take it with you. Outdoor fire pit that’s built into the ground? Stays. Elements in a yard or on a deck or patio that are built-in, like a pergola stay. Again, part of the structure.

Things like bathroom mirrors that are attached would stay. I had a seller take out a bathroom mirror and not tell anyone. I got some serious hate from their agent when I made them bring it back, but thems the rules! {Also, seriously, it wasn’t an awesome mirror so I’m not sure why they felt compelled to take it.}

In the contract there is a section with a big list of items and you are supposed to check the boxes of everything that’s going to be included. Some people get super nervous if all the right boxes aren’t checked but I’ll tell you a secret, it doesn’t really matter. Because it’s standard practice to leave certain items, and the listing also says what’s included, the seller can’t just change the rules just because you didn’t check a silly little box on the contract. I don’t even know who came up with this list because there are some wacky things on it, like sump pump, why would that be there, there’s no way a seller would ever pay to uninstall one that’s there if you don’t check off the box.

Sometimes interesting questions come up like, can the sellers take the Nest thermostat, can they take the sump pump {if the box isn’t checked}, can they take the wine fridge, or the cool light fixture… and I don’t think it hurts to verify some of these items just to make sure that everyone is on the same page. 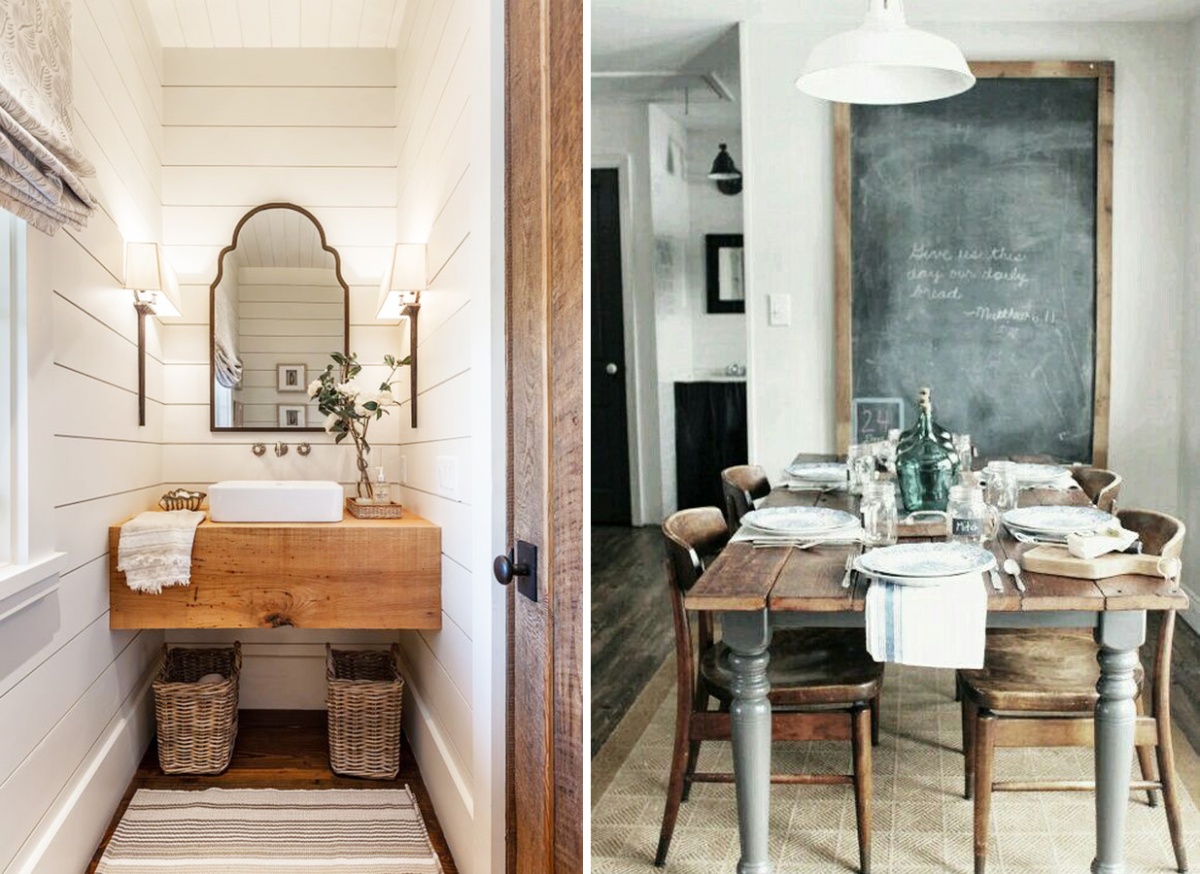 For example, the bathroom mirror in the picture above would stay unless the seller specifically states otherwise. The big chalkboard on the right? I would double check since it’s a unique item and is more a piece of art… I could see it staying because it’s so big and was kind of made for the space, but no guarantees on an item like this.

So if you are selling your house and there is something you want to keep, you have to say it when your house goes on the market for sale. But that doesn’t mean your buyer isn’t going to ask you to leave it anyway.

Part of me thinks it’s best to just remove those items before you put your house on the market to avoid any issues with a buyer wanting you to leave them etc. It definitely makes the sale part of everything easier and less messy but here’s the catch ~ you have to get something that’s just as good {if not better} than what’s there now. Especially if your house is well designed and whatever you want to keep is a feature piece. Have a cool light fixture? You’d better go find another equally as cool one to replace it! Don’t be lazy and just go get a Home Depot special and think that will work, it might make your space look worse… so if that’s you just leave it and deal with any issues later.

But in all seriousness, don’t go crazy with keeping things that would normally stay. If there is something that is super duper special that you want to take, that’s fine, but one or two items and that’s it! You don’t want to inadvertently make your house less appealing because you can’t let go of things, do you? You’re moving onto a brand new space, pull your energy out of this space so that you can create something new! No need to go overboard trying to keep everything from the now space…

And as the buyer, ideally you should find out about exclusions at the showing, but sometimes you don’t find out until you are putting the contract together. Then it can be frustration station. That’s why I wanted to share this not often talked about part of things, so that you aren’t surprised… or if you see something that looks maybe extra beautiful you can confirm it’s staying ;)

What’s the weirdest thing you would keep if you were to sell your place today? Are you a bit of a nostalgic sentimental keeper of the things, or are you a ‘get rid of it all and start fresh’ kind of person?!